A Conversation With Playwrights

Chat with AAPI playwrights Thelma de Castro and Jeffrey Lo as they talk about their respective journeys in live theater.

Come and see Thelma Virata de Castro and Jeffrey Lo during the PMX Charity Livestream on Twitch at 10AM on Saturday, July 17.

Thelma Virata de Castro is a San Diego Dramatists Guild Co-Ambassador, teaching artist, dramaturg, community builder, and founder of San Diego Playwrights. The TAG Project will be produced by Playwrights Project in August 2021 with support from an Artist’s Grant from the William Male Foundation. Her plays have been performed by Asian Story Theater, The Old Globe, New Village Arts, OnStage Playhouse, Circle Circle dot dot, Logan Squared Productions, and others. She’s won The San Diego Foundation’s Creative Catalyst Fellowship and worked on several California Humanities projects. She is a Hedgebrook alumna and is attending the Kennedy Center Summer 2021 Playwriting Intensive. 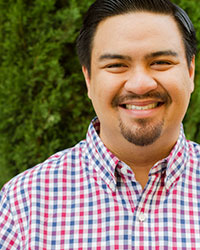 Jeffrey Lo (He/Him/His) is a Filipino-American playwright and director based in the Bay Area. He is the recipient of the Leigh Weimers Emerging Artist Award, the Emerging Artist Laureate by Arts Council Silicon Valley and Theatre Bay Area Director’s TITAN Award. Selected directing credits include The Language Archive and The Santaland Diaries at TheatreWorks Silicon Valley, Vietgone at Capital Stage, A Doll’s House, Part 2 and Eurydice at Palo Alto Players (TBA Awards finalist for Best Direction), Peter and the Starcatcher and Noises Off at Hillbarn Theatre, The Grapes of Wrath, The Crucible and Yellow Face at Los Altos Stage Company and Uncle Vanya at the Pear Theatre (BATCC award for Best Production). As a playwright, his plays have been produced and workshopped at TheatreWorks Silicon Valley, The BindleStiff Studio, City Lights Theatre Company and Custom Made Theatre Company. His play Writing Fragments Home was a finalist for the Bay Area Playwright’s Conference and a semi-finalist for the O’Neill Playwright’s Conference. Jeffrey has also worked with the Oregon Shakespeare Festival, The Asian American International Film Festival, San Jose Repertory and is a company member of Ferocious Lotus Theatre Company and SF Playground. In addition to his work in theatre he works as an educator and advocate for issues of Equity, Diversity and Inclusion and has served as a grant panelist for the Zellerbach Family Foundation, Silicon Valley Creates and Theatre Bay Area. He is the Director Community Partnerships and Casting Director at the Tony Award Winning TheatreWorks Silicon Valley, a graduate of the Multicultural Arts Leadership Institute and a proud alumnus of the UC Irvine Drama Department. Jeffrey is also a founding member of OUR DIGITAL STORIES, for more info www.OurDigitalStories.org.

The panel will be streamed live on Twitch at 10AM on Saturday, July 17, 2021. Questions will be accepted during the livestream through chat.